I'd been telling Yang for a while that he would have to feed himself and wear clothes by himself once he turned five. And he did both without prompting on his birthday!


Yes, this sunshine boy on a rainy day 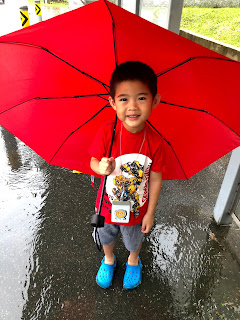 The Saturday before his birthday, we bought him a birthday cake at the new cakeshop downstairs from the school after music class, and got to redeem one play of hopscotch! He wanted me to jump with him but no, I didn't want to shake the building... 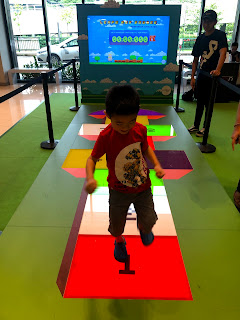 What a lovely cake! 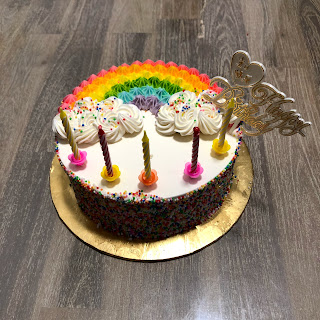 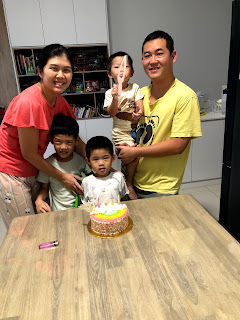 He chose Macs for dinner. Well, nothing to see there!

I took a long time to decide on where to go on his birthday. I let him choose between a boat ride and the Botanic Gardens - pleasantly surprised to hear the latter won! He also decided that Kai should not join us coz it was HIS birthday. 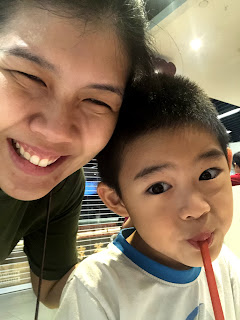 Came home to practise for his concert at the next music class, had a lolly, went through baby photos of Yang. Finally peak hour passed! And we were ready to go!


But first, Mama had to pose with a funny face... 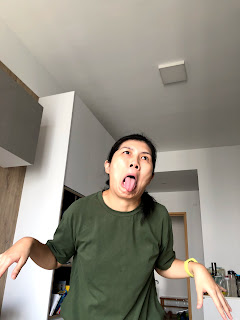 We took a train and walked to Jacob Ballas after a couple of wrong turns. I think the gardens could do with more signs for people like me... We ended up spending over three hours at the gardens!


Sand is always a favourite 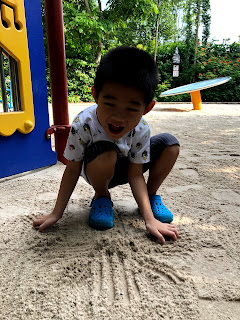 There was an excavator or sorts! 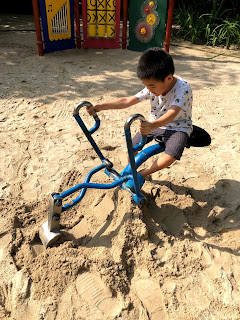 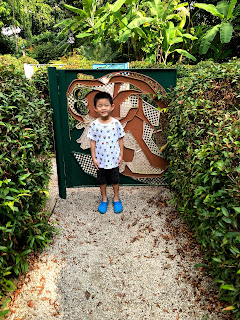 A tree house with slides! 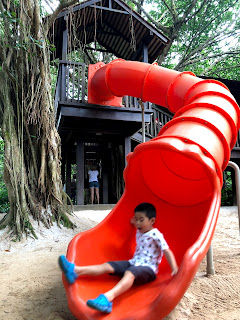 We spent nearly an hour at the tree house. He was playing, and I was reading on my phone. Towards the end, I found that he made a friend and the two boys were playing with sand and had dug a little pit at the bottom of the slide!


Taking a sip with tortoises staring at us 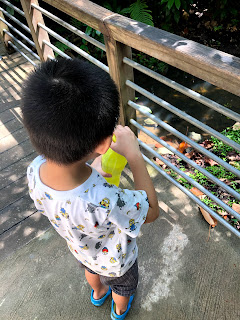 Ran along a shaky bridge! 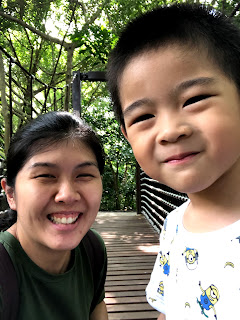 Walking on a very long bridge to look for more fun 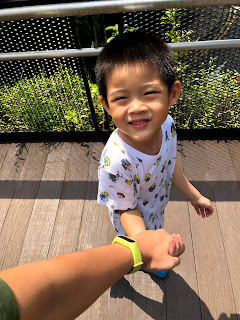 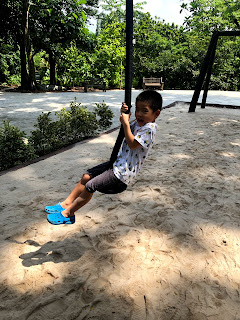 A pair of siblings were before us and they told him to hold tight. The bounce when he reached the end gave me a scare - it was a big bounce! Yes, have to hold very tight indeed! He played the thing for 10 or 11 times. That meant I exercised quite a bit too as I had to push him back to the starting point *.*


Walking on stones along a really tiny stream 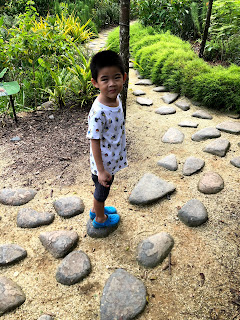 Colouring while waiting for lunch 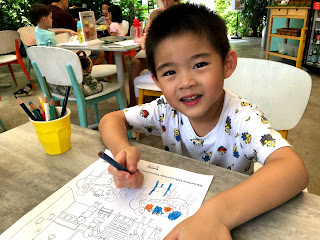 He said he was more hot than hungry but wolfed down his lunch - yummy, he said 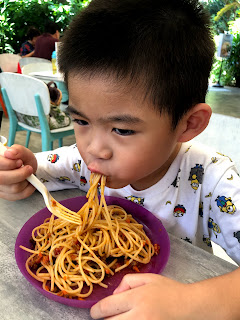 So I guess that was worth the $9 price tag, not other things included. The friend he made at the tree house was having lunch too - saw them talk a little just before I got back to the table. So cute, kiddy friendship :)


My third and fourth eggs of the day! 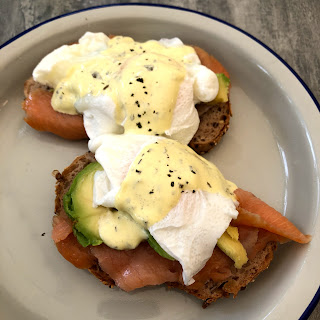 His request which was granted, only coz it was his birthday 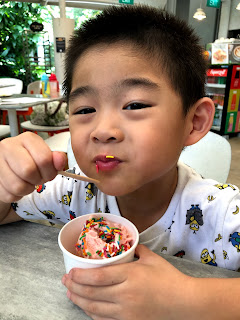 Yang on a digital botanic adventure! 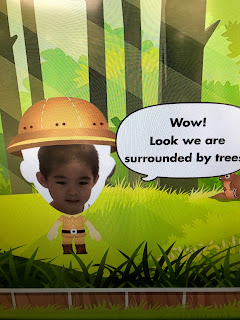 He continued playing with the big screen, colouring etc while I stoned on a bench. Finally, I dragged him away...


He wanted to take a picture of me with the swan but I forgot to turn it back to portrait after taking a photo of the swan... 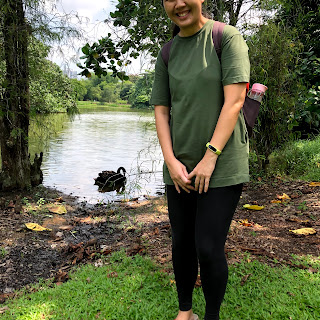 The bird stood just as I was taking a photo of Yang! 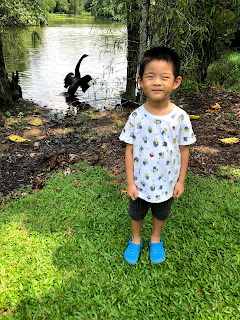 Took a train back. I thought he would fall asleep on the way but he didn't. We went to the poo poo shop as promised. That's the novelty shop downstairs - the boys found a buzzer that went pooooo on their first trip there last year hence the name..


And he picked up a present! 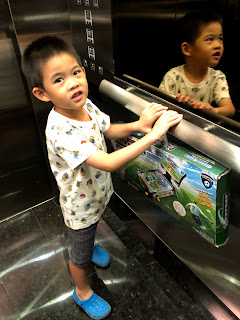 At first, there was the Star Wars Lego set from Legoland. But he opened it right after our trip so I didn't think he associated that with his birthday. Sito suggested not getting a present from the poo poo shop so that the boys would always love the shop and return to enjoy it. I asked Sito to bring Yang and Yu home every day, and watch them run into the shop and refuse to leave. There. 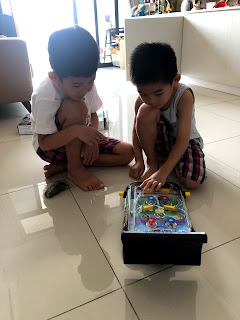 Yang refused to share at first but somehow, Kai "solved the problem" with some jellybeans. Good. Let them resolve conflicts on their own!

Got Yang a slice of cake but coz he wanted to return to his game, he had only a few bites. And Kai no longer likes cake. Ah well! 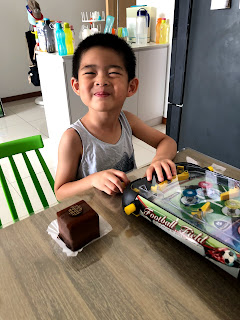 He did well for his concert on Saturday, considering that that was the first time he played to the accompaniment of his teacher! And so smartly dressed! 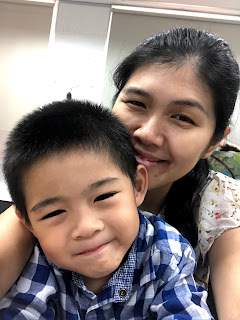 A lovely cake on Sunday! 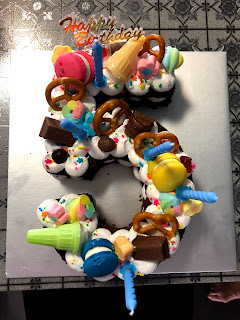 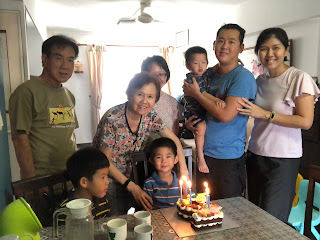 He got a similar present! 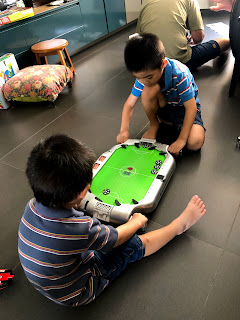 One night after his birthday, we were lying on his bed at bedtime. Somehow we talked about how he might be taller than me by the time he is 15. He asked how old I would be by then. When I told him, he went, "So old?!"

I didn't realise the impact that had on him until a few days later when we were in the dark at bedtime again. It was 4 July - I know coz I posted on Facebook. He suddenly told me, "Mama, I don't want you to grow old and die..." Awww... I lost it when he wiped his eyes - it might not be tears coz I couldn't tell but gosh. I teared up and told him I would try my best to live to see him grow up. Love this sweet little boy!
says mf at 10:40 pm No comments: