Went down memory lane on Friday.

I used to attend a children's class at a Buddhist temple every Sunday, probably during my primary three to six years. I don't know how it started - it could be that the temple was a stone's throw away from my paternal grandmother's place, even though she moved away when I was in, I think, primary three. Or a relative brought us there and then they stopped going while we continued. Or it could be that Mother knew someone who brought us there coz I remember her talking to this auntie.

We visited some temples in Penang in March this year and I was somewhat reminded of those times in the temple. I made a note to myself to return. Didn't manage to do so during pregnancy but I finally found my way there with Yu!

It was a quick train ride to Serangoon followed by a short bus ride. I had always thought the temple was in Paya Lebar but it is actually in the Serangoon/Hougang area, in Paya Lebar Crescent. When I got off the bus, I looked across for the clan house that my paternal grandmother used to work and live in. Or rather, the spot, coz it had since been demolished.

It was a big old house with a zinc roof. There was a huge hall where banquets took place - I was there during one and the large backyard was filled with tables as well, near the hot temporary kitchen with gigantic pots. There was even a stone mill which I remember pushing. The backyard was meant for the chickens and dogs and a single parrot. I remember sitting at the threshold leading to the backyard to play with dough.


I think this was at the door to the backyard 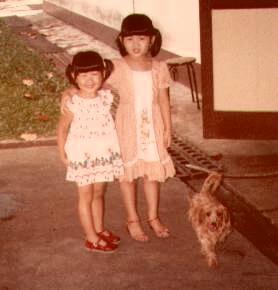 The hall was also where we loved to run around and play. I remember climbing up the big chairs around the big boardroom table and sitting on the table with a boy who lived nearby, playing with cars or something.

The actual kitchen, well, actually I don't think there was a designated kitchen but there was this huge yard in the house that opened up to the sky where my paternal grandmother cooked on a earthen stove. The dining area was just off this yard, sheltered.

There were a few rooms here and there. I recall a small room before the big hall with a telephone. It was very dark. There were at least three other bedrooms as a number of my relatives used to live there with my grandmother. In one of these bedrooms was a four poster bed, very old. I remember a sleepover there before - not sure if YQ was born yet - and I remember fearing or seeing a cockroach at night *.*

There were shophouses to the right of the house - left in the picture below. They have staggered height. Based on this memory, the house should have occupied the spot right behind the bridge...

I walked into Paya Lebar Cres. I don't remember what used to be along this road but things looked old. Now? Spanking new condos.


The turn to the temple 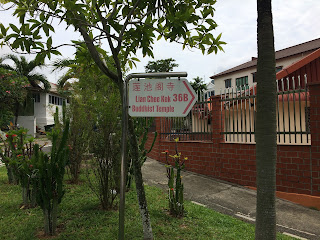 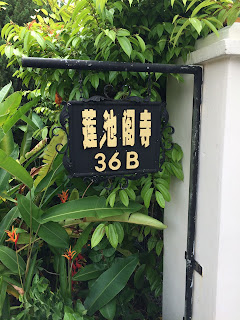 The door seemed familiar - so many shoes right outside last time 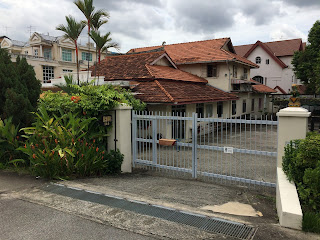 While I no longer remember my initial reception to the Sunday class, I do remember that I liked going there. We would start at about 10 am with prayers in the main hall. Sometimes, such sessions can be very long; I never knew the programme. Teachers would go around with a ruler to straighten our back during the meditation. I must admit sometimes I would doze off... 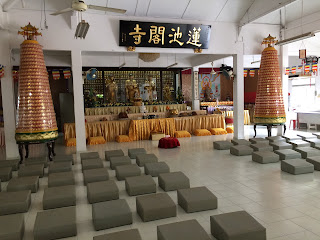 Then there might be some singing. There is still a piano to the left of the hall. Then we would go to our respective classes. I enjoyed 小班 very much - I remember discussions on the severity of sins! I think I went into 中班 in primary five. It became less fun *.*

There was also 大班 which I never got to coz I stopped going in primary six - we told the teachers it was due to preparation for PSLE. The fact is, I didn't want to participate in a angklung concert that they had us practising for. I was super scared of performing or going in front of an audience - including my class in school - in general. And I didn't like it that they didn't tell us about the concert when we first started on the angklung. In any case, I was not going to do it!!

After class, we would go to the back for lunch. I remember the curry was nice :p And I never liked the bitter gourd soup! The back was also where we would have activities sometimes. I vividly remember one where all the kids were seated in a huge circle - there must have been some 60 of us?! We also had excursions - once to some outdoor place, once to another temple on Vesak Day, once to watch a movie on a renowned monk.

I met 传观师父 while in the main hall. She said the classes were still going on but from what she said, it seemed that they weren't too regular - not enough teachers and the children have other activities like holiday enrichment and travelling. It struck me that these days, there are just too many activities to choose from. Perhaps people tend to forgo those not related to education or fun?

She asked me to bring the kids next time - while they can decide on their religion in future, having some immersion when young would help them as Buddhist teaching will guide the kids towards good. They have a sister temple near Beauty World. Perhaps when we move to Bukit Panjang, we can go have a look...

Before I left, the kind nun gave me some cookies to bring back to the kids. I did the usual 添油 and left. It was a very hot journey but I felt fulfilled at the end of it, like I've returned to some roots.
says mf at 10:35 pm