So, this ZY has self-weaned. This mama is sad :(

It was early morning on Saturday, 9 May, when he didn't want my milk milk. He only CHEWED on me a few times. And smiled.

I offered again for the next two or three mornings. He went from chewing to simply pushing himself up and away from my milk milk factory. So that was it, no more breast milk for my littler one - and he's only 10 months old!

I should have expected it. After all, he was never like ZK, who sucked so enthusiastically. And if he bit me, it was not like the way ZY bit. If I didn't stop him, I believe ZK would have continued breastfeeding way past his first birthday.

It's been two weeks since ZY's last feed but I still have some milk. Even my left side, which closed down way earlier, had a few drops when I tried to express this evening - wanted to keep a bit in the freezer to moisturise my lips :p 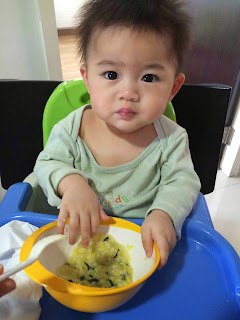 Slippers are my go-to on weekends, some Fridays and when trotting within office grounds. Three pairs of them broke my heart when they broke. 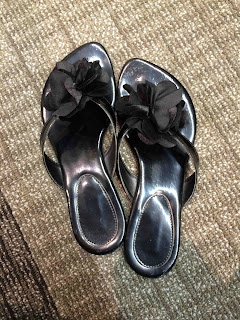 They were pretty comfortable for a pair of fashion-fashion slippers. I started using them only on pedicure days during weekday lunch hour, and eventually wore them in office the whole time. 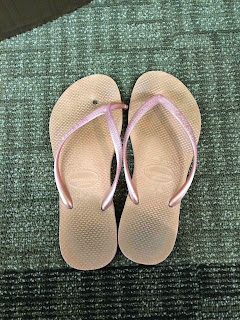 These were pre-Evanston, probably post-wedding. Wore them in the summer months in Evanston. Super comfortable except when I had water retention during the last few weeks of being pregnant with ZK. When they broke, I bought a pair of Ipanema slippers instead - much cheaper and prettier! 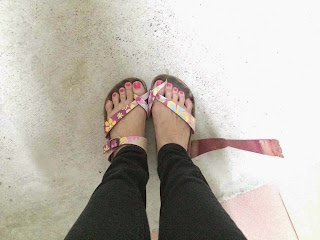 And today, Sito and I barely stepped into the hawker centre when the big strap snapped open. Tried to buy a pair of slippers from the shoe shop at the shopping centre but it was closed. On the way back to the hawker centre again, the small strap broke loose! The small strap first came out a few weeks ago but I glued it back, though I couldn't make the strap go in all the way so it was a little loose.

My earliest memories of this lovely pair of slippers were in 2006 - pre-Sito! Certainly well worth the money. I think I'll try to glue the straps back tmr but I really should buy another pair to stand by. I only have the Ipanema slippers left and they are for the office. But I'll go for a cheaper option - no more Birkenstock!
says mf at 9:21 pm No comments:

End of an era and a new chapter shall begin

Tomorrow, I'll have a new job. This will be the first time since 3 Nov 2003 that I'm transiting to a new job with new boss and new job scope in another subject matter.

I was very busy preparing for a meeting on Wednesday. So it wasn't until Thursday that I could start to think about leaving. What was it about the past flashing by before your eyes when you're about to die, or in this case, leave?

I have been in here since 2006. As a member of the first team, I played a big role in setting this place up. I used to work very hard. I could pack dinner from Maxwell and carried on until late. I could stay there until past 2 am. That was until I got a desktop and could keep my laptop at home so I didn't have to lug the machine to and fro. But for some months in 2008, I still worked in office until near midnight due to momentum - and I continued until about 3 am most days at home. High doses of multivitamins kept me from falling ill.

There were times when I complained of overwork - not enough people, too much work. So I had to find time for my own life somehow. At least once, I went clubbing straight from work on a weekday and still showed up for work the next day. At least once, I went back to office at 4 am after partying to grab my laptop so I could work over the weekend.

I have no regrets working so hard. (Except perhaps that I didn't sleep more when I had the choice; now I have no choice!) In fact, I thought those were the best years of my time in service. Super siong, super fulfilling.

The past two years were pretty meh in comparison. A few months in, I knew that I needed to move on. I gave myself until the end of 2015, latest. I could see no progression. I mean, I don't mind retiring at MX11 but I want to retire in a preferred work area. The area I was in was not it. I wanted a job in another department but well, it's where 有位都轮不到我 as there are so many "in-waitings". I shared my sentiments with a peer who was in a high-potential programme from which HR withdrew me when I was on no-pay leave - she felt the same way! But I will reach my 10-year mark this year, which means I get 28 days of annual leave! As CY says, can sign on already! Yup, so I will be staying in the service.

Following a super sian meeting in January, I went patrolling again and saw something interesting. Found someone I knew there and thought no harm asking her out for a chat. Turned out that she had just moved on and had an opportunity for me - better than the one I saw! Secured the position within three weeks and informed my bosses. The HR and admin procedures took a little while longer but by end March, I was counting down to tomorrow.

We announced my leaving to the team in early March. At the same time, due to some issue, my executive was leaving as well. And, my director was scheduled to leave in end March; my direct boss would take over from April. A lot of changes!

That very afternoon, my support staff asked me whether there would be opportunities for the two of them where I was going. I knew that one of them was already sian, having been here since 2007. But the other one.. And we could not afford to have them both leave at the same time! Had to sit them down to understand more.

Well, the three weeks after that turned up a lot of issues with this place. My staff had difficulties working with the other team due to different job nature and personalities. I later found out that the other team also had their own issues, which weren't very different from mine - hard to detail here. Tried to resolve the support staff's issues before I left but I managed to help with only one part. I wrote a love letter about it to my boss about it on Friday - hope she could continue to help them..

Luckily, my executive who was leaving was not leaving after all. That brought some balance to the team, thankfully. My replacement also came in by mid March so I had some time to download information. She wasn't supposed to be my replacement but since I was leaving, she became a direct replacement. The team was still warming up to her.

Then some time in April, I discovered that I did not have a salary increment this year. Thanks to S's reminder, I dug through my archives and realised that I hit my salary cap last year AND I DIDN'T KNOW IT! That brought me to a meeting with HR and man, this place was really shitty!! To cut the long story short, I put up an appeal against non-promotion eventually. HR offered to guarantee promotion next year if I stayed on until July so that they could rank me. But if I did that, I would have effectively said that it was ok not to recognise my hard work before no-pay leave. I refused, as my gripe was not about promotion but about recognition. Through the process, however, I found that the big bosses were really supportive. I feel vindicated already.

Anyway, so I was leaving. When news spread, I had a lot of free lunches haha! I'm not the kind to go out for lunch with colleagues all the time. I prefer to eat on my own so that I can get back to work quickly. So it was a surprise to suddenly have lunch dates. And no one surprised me more than one of my support staff. She has always been quite quiet but on Friday morning, she started a group chat involving our team of four, with an emotional farewell note. I was sad at leaving this place even though it was my own choice. But since it was my own choice, I was determined not to cry. I failed upon reading her note.

I worked until 3 pm on Friday, I think, before I went around offering chocolates to people. Had short chats with some of them. All too soon, I was really reaching the end of my time there. IT dismantled my laptop setup, collected back the iPad and left my desk bare. I was left with a few bags of random stuff, and three sad persons standing with me, waiting to send me off. We agreed to catch up once in a while - and they would fill me in with the office gossip! 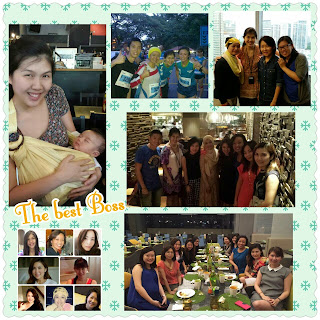 Now, I need to look forward to something new, happening in less than 12 hours! Read some emails from my new place already. Very operational, more so than in my old place. I just realised that I was in start-up mode since I started work back in 2003! I'm probably going into a more steady organisation and work area tomorrow. But we shall see...
says mf at 11:25 pm No comments:

Nope, not his birthday yet but Sito and I took a day of leave to spend some time with our firstborn :) He's been relegated since ZY arrived and acting up lately so yup, time to show some love!


Smiling on request on the way to West Coast Park 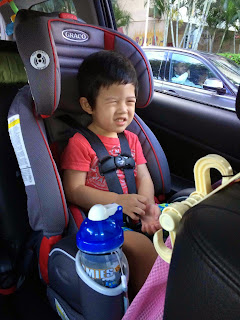 ZK has lots of construction trucks. We brought an excavator and a dump truck. But the latter was very small cos the bigger one could not be washed. So he looked like he was burying the dump truck every time he loaded it :p 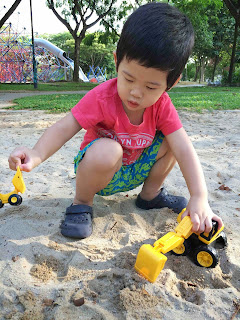 The last time we were at West Coast Park, he wasn't happy with the sand. But now with the trucks, he is ok playing with sand, yeah! Can go beach holiday? :p


Wanted him to sing Happy Birthday but.... 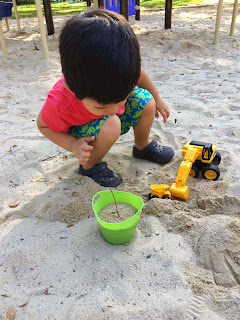 Papa wants to play too :p 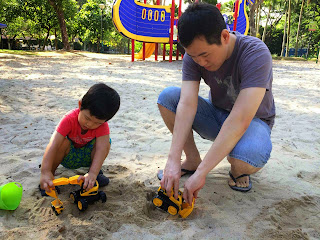 Went to play a little at the swing and fire truck. There were only two other families - but I heard that their girls were ill so we scooted off!


Time to pour out the sand from my shoes.. 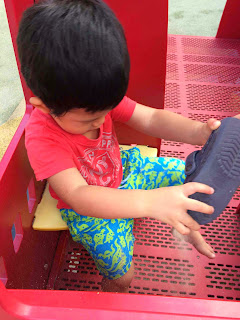 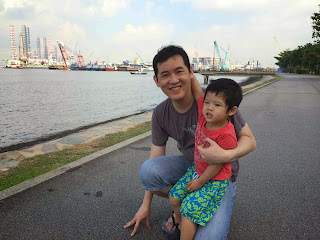 ZK wanted to play more so we let him play with sand again at another spot. We eventually left and returned home for a shower - we were all so sweaty! Then it was off to a ramen lunch downstairs before sending ZK to school.


My smart boy in his first hand-me-downs! 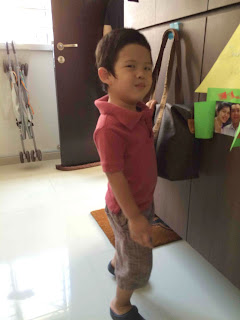 Would love to have more ZK's days :) In fact, we had another one today - Mothers' Day party in school! Would probably do a little post on that when photos are in...
says mf at 11:23 pm No comments: