Update on the new helper

I wrote this back in early July and just saw that I never posted it... Edited:

I think I mentioned before that Y had issue staying with the kids in their room due to the aircon, about 26-27 degrees. She spoke of leaving early so we agreed on end July/early August, which was just as well cos her contract would have ended in end September, two weeks before our holiday.

So I was looking around for someone and editing the tasklist etc. And lucky I did cos in late May/early June, she suddenly brought forth to end June! When someone wants to leave, there's no point keeping. So I stepped up my efforts and started interviewing people.

Times are rough. I learnt that those already here had high expectations. Many wanted expat employers. Even off on public holidays. But eventually I managed to find N through an agent with reasonable fees. My last agent quit serving employers and his contact wouldn't have workers until mid July after Hari Raya Puasa.

So a couple of days after Malacca, on 30 Jun 2015, I took leave to send Y onto the ferry to Batam. That night, we realised how nice it was that there was no outsider in the house!

But N came the very next day. A more kampung girl, with all her belongings in a duffel bag. So far, she has dressed decently on her off days, way more decently than Y. She's also more ready to help take care of the kids at night. Just that she can be very blur - lost two mini cups for ZK's multivitamins already *.* But I know we can't have everything.

I still don't sleep through, cos this ZY will still walk over to our room silently so N cannot hear him. But at least, I can easily pass over to her. That helps cos this new job is busy! But I like it haha!
says mf at 4:24 pm No comments:

Just realised that I wrote only once in August! I've been so busy with work - it's OT almost every night; else I'm so tired I sleep early *.* - that I'm missing out on recording my babies' growing! :(

So, what has happened in the past few weeks??

ZY can walk without support already! I was told he could do that in school but it was only on 31 July that I saw him do that at home :) I thought he started walking earlier than ZK but I just checked and it was comparable; ZK was walking at 13 months too.


And outside too! This was later in August. 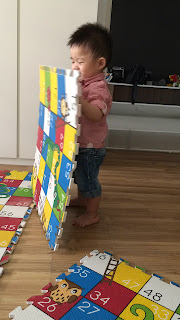 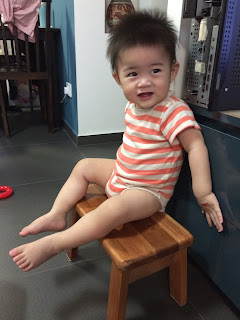 Run all over the shop! 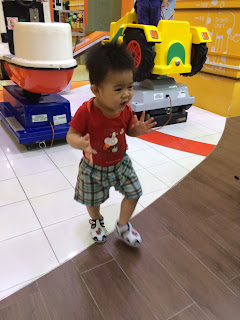 Have I mentioned his teeth? So the same link above said that ZK's upper teeth cut through at 13 months but there is still no sign of any upper teeth for ZY at 14 months and counting! But his lower teeth have come out fully, unlike ZK's which took their own sweet time...

ZY has also developed a temper. I scolded him one evening the week of Teachers' Day, and he refused to let me carry him to bed! Fine, I could have my dinner earlier, hmph!

But when this boy is guai, he's really guai... Like when he's reading.. 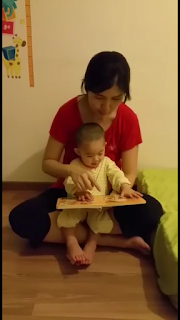 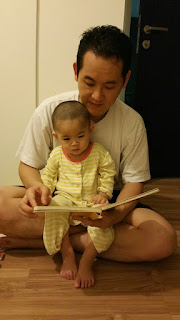 His sleep pattern sucks though. He keeps waking up at night. If he cries, N goes over. But there are times when he wakes quietly and walks over to our room quietly. Then the mama swings into action to get him back in bed. And in the past couple weeks, it got worse. He wouldn't go down for naps unless some four hours have passed since he last woke, which means afternoon naps are always a struggle.

Before ZY, we always wondered - and feared - what if ZK turned out to be the 文静 one?? Well, that has happened *.* But we're surviving! Even ZY's infant care teacher was saying that he is naughtier than ZK! I'd like to think that they're not naughty; they're just playful... We just have to be patient. One day, he'll be easier, like ZK is now :)
says mf at 4:23 pm No comments: