Had a bad moment on Thursday.

As usual, the kids wanted to go up the stairs after crossing the road so I told Yang to watch Yu and pushed the strolled up the slope quickly to meet them on the other side. But as I dashed up on this slope for the nth time, somehow I fell. I recall trying to hold on to the stroller but it slipped and fell on its back, just out of my reach as I landed on the ground.

It took another second to realise that the boys were still waiting for me between the lift and the escalators, so I pushed myself up with great effort and pushed the stroller up again.

Yu was just coming down the slope to find me. When Yang learnt that I was hurt, he passed his sticker to his brother so that his hands were free to help me push the stroller. Thank goodness for them so I could continue. 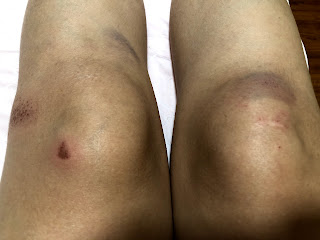 That evening at bedtime, I was sitting on Yu's bed, watching them play. There was no school the next day, Teachers' Day, so Kai was in the same room too. So things were bound to get rowdy. But it went too rowdy. When they started throwing all 30+ loose items - soft toys, pillows, blankets - at one another, I lost it.

It took a few hits to my face before Kai noticed something was wrong. He came over to ask me what was wrong. I told him I was very tired and needed to rest, and shifted to the window corner as I sobbed. Somehow, the boys thought it would help to put pillows around me - it was sweet of them. When one of the Y's - can't remember which! - talked about continuing to play, Kai rallied them to pick up the toys and rest.

It has been a very tiring period at work. I start at about 7.45 am after sending Kai to school. I have breakfast while clearing overnight emails - I have colleagues who start work after midnight. No lunch coz breakfast is big. I end at 5.30 pm so that I can pick the kids up. When the kids are down, I boot up the laptop by 9.30 pm, and don't stop until 11.30 pm or midnight. 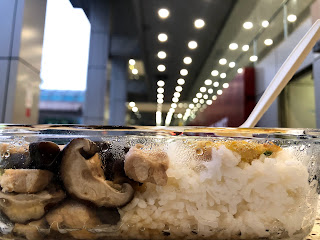 This happens every Monday to Thursday. I didn't use to work on Friday evenings but since I don't know when, I have been leaving the kids to YouTube Kids after dinner and doing work while waiting for Sito to go for date night, and continuing after getting home.

Perhaps I should consider myself fortunate that I don't have to work weekends unless absolutely necessary. That happened a few times in July-August. Once, on a Sunday when Sito had brought Kai and Yang to the pool, Yu refused to go without me and was wailing on the floor while I tried to do something on my laptop.

I don't even remember what that piece of work was. But I remember my baby crying.

The kids don't get much of me on weekdays. So weekends are precious. Tiring, yes. But precious.

Anyway, this all adds up to a very tired mf.

I have started to dread Mondays. I have been dreading 9.00 pm - the hour when I get back to work even though there are many other things I'd much rather be doing, like continuing to sleep with the kids. I dread meetings - they either lead to more work or nowhere. I dread being unable to finish my work. I dread the feeling of being tired and not able to do anything about it. I dread dread.

Since late last year, Sito told me on more than one occasion that I could quit. But I have been holding on - perhaps I just need to get through this busy period, perhaps the light at the end of the tunnel will show itself soon. But one busy period merged into another. And I soon found that I was going deeper into a cave, not a tunnel.

And what was I going to do if I quit? Seriously no idea what I could do outside civil service. I also don't want to stay at home and watch my face turn yellow into the proverbial 黄脸婆! Though I can think of so many things I will do - sorting out the house, cooking, gardening, reading and writing.

But late August, after a double bout of cold, I was ready to tender. But somehow I thought of going to the temple so I did one morning after dropping Kai. And I drew a bad lot. Sito and I read various interpretations. I also asked Mum to help decipher. But it seemed to tell me to stay put and take steps to change my situation.

Obviously not successful going by the Thursday incident.

I worked quite late to finish up stuff on Thursday. On Friday, I logged on to clear stuff while Yu was napping. I wonder how tomorrow will be - already received text messages on work. I have two more working days before Legoland. It's probably going to be some serious payback before and after that. That just might be last straw, bad lot or not.
says mf at 10:27 pm