These kids are just cute - in looks and in words.

Just now, we were happily playing at bedtime when suddenly, Yu exclaimed that his pee pee was coming out! But he sounded more upset than urgent - oops, he had already leaked! He looked down in dismay.. I told him to keep holding it and go to the toilet. He asked to change when removing his pants. So poor thing.. But I was so glad he managed to control himself!


Happy during our art and craft activity this afternoon 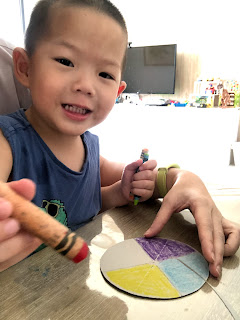 I've been meaning to do this activity ever since Kai and I saw a girl play with a colour wheel on the bus one morning. Finally we did it! But it turned out that our wheels are not stiff enough. Or this mama just isn't very crafty!! Anyway, it couldn't be spun really well so the boys, led by Kai, repurposed it and swung in all around instead!

Yesterday, Yang did very well at music class. He guai guai played his pieces and tried his best. So he got to play ball game! 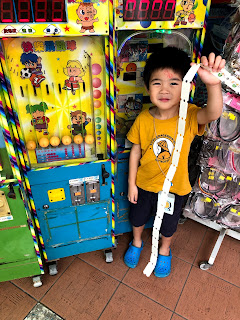 I didn't know that having a ball in each hole could give so many tickets. I thought it was better to have all in one hole. Perhaps both work?? Anyway, he was super happy coz he knew the tickets could be exchanged for little toys - we once exchanged some for a mini tube of bubbles and he played with that while we waited for the rain to ease up.

So how did he do that?? "Coz I use my mind," he said. I was holding it. "And the balls like me, right?" Haha! yes, indeed the balls liked him! Have to explain what a fluke is next time...


Later in the evening after dinner at Macs 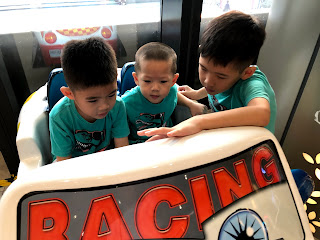 
And they played "chess"! 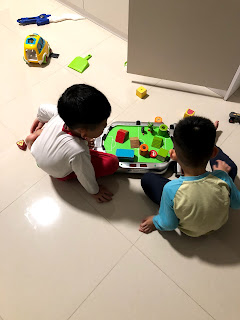 Kai was inspired by KS during the Cameron Highlands trip where he learnt that he was good at chess. Sito and I will get him checkers to start with :)